By Peter WilkinsonAugust 1, 2013 No Comments

Change management is about looking at new ways of doing things to adapt to new conditions.

So, brought to us by the guy who introduced us to Creating Shared Value (CSV), is a bight shiny new sustainability toy, The Social Progress Index (SPI).

CSV gave us a way of looking at projects that a company can invest in, with all the feel-good aspects and social benefits of Corporate Social Responsibility but with the added element of being profitable  (The huge disincentive of CSR is that often the social and environmental merits of a project impact on the bottom line, and so in financial hardtimes despite the best will in the world, the project bites the dust).

So a company like Nestlé (which promotes CSV as a company policy) has invested in a new, more valuable variety of oats in Australia, which gives security of tenure for oat farmers – that’s the CSR. Then Uncle Tobys Oats buys the better oats providing long-term security for its supply chain and is at the same time more profitable.

As a result of a CSV prism companies are positively encouraged to look at success in terms of  profit plus — . So it’s not such a big jump to encourage countries to do similar: view success as GDP plus — . That’s what SPI is designed to do.

SPI looks at what really makes countries good places to live in, over and above just GPD. There are many factors in this ‘health report’ but they are lumped into three categories:

For details see here. And for infographics like the one to the right go here.

For an opinion on this read the Guardian’s article (linked and) below. BTW – Australia comes 7th on the leaderboard.

The Harvard professor, who created the concept of shared value, hopes to bring social and environmental considerations to the top of the policy and corporate agenda 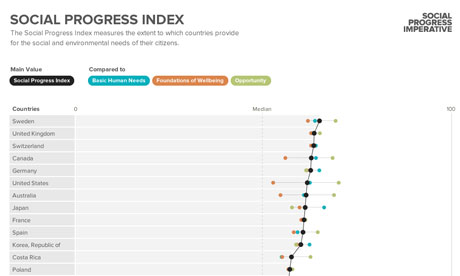 Can Harvard professor Michael Porter do for wellbeing and happiness what others have so far failed to achieve?

The creator of the shared value concept, who has the ear of both big business and governments, has unveiled a “rigorous” new Social Progress Index (SPI) that hopes to put social and environmental considerations at the top of the policy and corporate agenda.

He believes that a strong foundation of knowledge and analysis is essential if government, business and civil society are going to be able to collaborate to create new measures that look beyond gross domestic product (GDP), which has dominated the post-war global economy.

Porter hopes that the SPI will become as prominent as the World Economic Forum’s global competitiveness report in driving best practice and a race for the top.

A new organisation, the Social Progress Imperative, has been created to support the development of the SPI and help to integrate it into corporate and governmental thinking. Paraguay has already agreed to adopt it and Costa Rica and Peru should follow quickly. Discussions are also starting with the UK’s Cabinet Office and Porter is talking to major companies that are using his shared value model to get them on board.

The SPI, which ranks 50 countries, places Sweden as the most socially advanced country globally. The UK is ranked second, above Germany, which ranks fifth, the United States, sixth, and Japan, eighth.

It is likely to be no revelation that these countries enjoyed nearly double the score of those countries at the bottom of the table: Ethiopia, Nigeria and Uganda.

While the conclusions of the initial research do not generate any great surprises, they do give an empirical underpinning to what many see as perceived wisdom. Wealth, for example, is no friend of planetary boundaries. Nearly all rich countries perform poorly on ecosystem sustainability – especially large countries with abundant natural resources like Australia (46th), Canada (47th), and the United States (48th).

Porter, who is a leading authority on company strategy and the competitiveness of nations and regions, says it is ridiculous to be measuring success purely on the idea of growth at a time when countries are facing massive social upheavals.

He is also critical of previous work that seeks to integrate wellbeing and happiness into the economic agenda. He believes past indices have failed because they have tried to mix economic metrics with social metrics. The SPI only looks at social and environmental considerations and therefore gives them authority in their own right and allows them to be compared and contrasted with traditional economic measures.

“The Arab Spring of 2011 and the challenges in Mexico over the last decade, have illustrated the shortcomings of economic growth as a proxy for social progress,” says Porter.

“In both business and economic development, our understanding of success has been incomplete.

“Previous efforts to go beyond economic measurement alone have laid important groundwork, but we need a more holistic, comprehensive, and rigorous approach. The Social Progress Index is an attempt to address these gaps and opportunities.

“Social progress depends on the policy choices, investments, and implementation capabilities of multiple stakeholders – government, civil society, and business. Action needs to be catalysed at country level. By informing and motivating those stakeholders to work together and develop a more holistic approach to development, I am confident that social progress will accelerate.”

The SPI, which uses original research as well as data from organisations such as the World Bank and the World Health Organization, concludes that while greater income does lead to a better standard of living, once it has gone beyond a certain point, peoples’ happiness flatlines and can start to fall away.

Perhaps more interestingly, the research also shows that it is possible to achieve a high level of social progress at a relatively modest income level, and that progress relies on an effective policy structure rather than the size of the economy.

For example, Ghana and Nigeria are similar in size, but Ghana is shown to be much more effective in terms of achieving progress.

The SPI also shows that no countries score in the top half for all 12 components of the index, which are nutrition and basic medical care; air, water and sanitation; shelter; personal safety; access to basic knowledge; access to information and communication; health and wellness; ecosystem sustainability; personal rights; access to higher education; personal freedom and choice; and equity and inclusion.

Michael Green, head of the Imperative, says the most exciting potential of the new index, which will take another two years to fully develop, is that it can turn current thinking on its head.

He says: “There has always been the idea that economic growth is what gives you wellbeing, but what the index shows is that it also works the other way around and that wellbeing also creates economic progress. If a country is more stable and more at peace, then clearly it’s a better place to do business.

“The index should help companies to further embed the idea of shared value because it will give them the data that will help them to prioritise which social issues to help address in any particular country.

“It also offers a big opportunity for social entrepreneurs because it can show how they are adding value and giving them a voice in the policy debate.”